“It seems pretty,” she said when she had finished it, “ but its rather hard to understand!” (You see she didn’t like to confess, even to herself, that she couldn’t make it out at all.) “Somehow it seems to fill my head with ideas- only I don’t exactly know what they are!”

Alice Through the Looking Glass

After Ecuador, I headed south to Peru where I had a few days alone in Lima before i started a three week tour. I find it is usually best to spend some significant time alone before embarking on 21 days with people. I spent these days wandering around town, eating street food, roaming the beach and going to the cinema. And laundry. There is always laundry. I stayed in Miraflores in Lima where I did manage to find excellent coffee and decent gelato. Miraflores has a beautiful beach front where you can walk along the cliff for 12K, the city on one side, the ocean on the other. I found myself returning to this spot regularly just to people watch, filling my head with all kinds of ideas about who they might be.

While my tour started in Lima, we spent only one evening there, most of which I spent hanging out in a bar with an Alice in Wonderland painting with two of my fellow travelers, knowing immediately that this was a great group of people. We flew early the next morning to Cusco, a city that was once the capital of the Incan Empire. This is a great city, filed with locals and tourists alike. After our arrival, we visited Saqsaywaman (pronounced sexy woman), an old Incan holy site and Cusco’s version of Christ the Redeemer. Then, we made the huge mistake of going yarn and blanket shopping. The very clever sales staff had us feel sheep and alpaca wool and then reeled us in with the big one- baby alpaca. Once you feel baby alpaca, no other wool will be good enough. We were hooked. I managed to escape with just a few skeins of yarn. I was one of the lucky ones!

Cusco was the stopping point to put some ideas about Incan civilization in our head before we headed to Machu Picchu. It also turned out to be a culinary adventure. A visit to Mercado San Pedro presented a massive warehouse of any type of food you might imagine and plenty you didn’t want to actually see. I loved it at this market and could have spent hours lost in the aisles. But it was time to move on….to the Gastronomia Cusquena Para Todos- or The Taste of Cusco as I have named it. Here, you could choose the guinea pig you wanted roasted- your choice being one stuffed with an onion or a pepper in his mouth. Instead, I opted for some local empanadas and a quick visit to the Sun Temple. This was rumored to be a highlight, although the allure was lost on me. It is an Incan Temple with a Christian Church built on top of it. It felt like a missed opportunity, they could have made it so much better than it was. I had tons of ideas for them!

After one day on our own in Cusco, we hopped on a bus to Ollantaytambo for more crazy Incan ideas as well as a new crafting addiction for me. If you know me well, or even a little, you will understand how giddy I was when we arrived at a Women’s Weaving Co-Op. And how I had to be physically dragged away when it was time to go (exaggeration alert). After meeting their alpacas, we learned how they clean and dye their wool and then spin it. Watching them spin peaked my interest and will be the first hobby I acquire when I return home. They then knit or weave this yarn and sell it to us. I was in heaven. Pure heaven. I did learn a few other random things- the women do not have gray hair for the rumored reason that they use a special aloe shampoo. Also, the altitude is too high for snakes and nearly everything they do is in support of Patchamama or Mother Nature.  I suddenly had the crazy idea that I might just live there forever.

Next stop- Pisac and a chance to see Incan ruins. The first thing I learned is that Inca is the name for the king and therefore the people are not Incans, making everything I have written in the blog so far completely incorrect. Rather than correct, I will let you learn from my mistake. I also learned that there are 2800 varieties of quinoa, most not edible. We did get to see the largest Inca burial ground where the bodies are buried in caves in the mountain in fetal position. Much like how Chicago got the nickname “Windy City” or how the name “Hoosier” came about, no one knows why but everyone claims to. After Pisac, we went to Ollantaytambo where, you guessed it, there are more Inca ruins. Only these are some of the few unfinished ones. I have a million ideas about how they built all of these buildings and terraces, but I am sticking with my aliens theory. They built these things to withstand earthquakes and tourists. 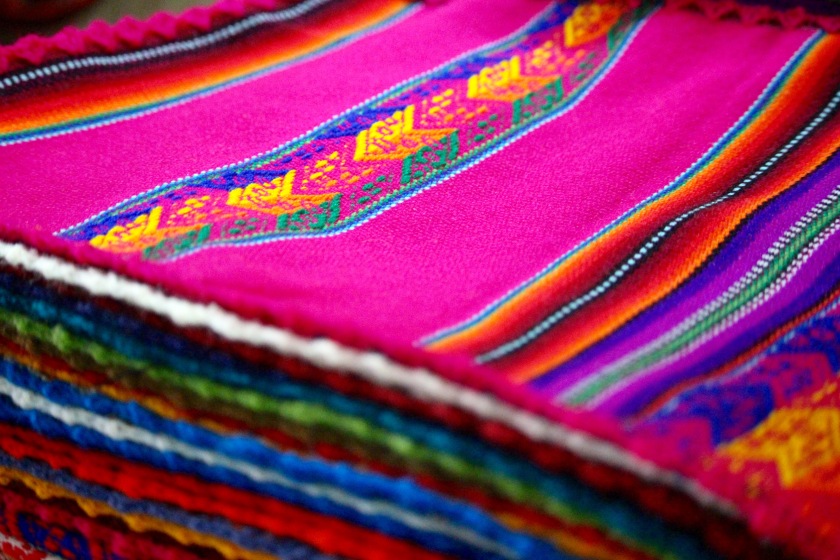 The next morning, a handful of us climbed up one of the mountains in Ollantaytambo and had one of my favorite travel moments- talking about random topics, big ideas, dreams and histories. Then, we boarded the train to Machu Picchu. Our guide forced us up at 3:30 AM to be one of the first on the mountain. Don’t tell him, but he was right. We arrived and were greeted with rain and mist. First thought- this sucks. Second thought- it adds a whole new level of mysticism to the site. And gives me an unruly head of curls. I didn’t know a whole lot about this place before I arrived and honestly expected a more spiritual place. Nope, it is an old Incan town, divided into three sections, agriculture, urban and religion. It was a primary trading post which is why it is so important and needed to be protected from the Spanish. It was a meritocracy so status was based on intelligence. I couldn’t help but get the idea that it might be something worth pursuing. There are 30,000 kilometers of trails and they used hydraulic engineering to provide drinkable water. It is also the entrance to the Amazon jungle. Most importantly and most dear to me, they invented french fries. Now these are some people I could dig. After repeated moments of having my mind blown with moon circumferences, Incan calendars and on and one, the sun came out and I hiked up for the tourist shot of Machu Picchu. Alas, it was time to move on.

Back to Cusco we went to do some laundry (there is always laundry to be done) and pick up our luggage. While we were there, we took an excursion to a Rainbow Mountain, one of the most beautiful places I have ever seen and one in which any photograph could not possible do justice. Rainbow mountains are unique to this area look like multicolored striped mountains. The striping is due to weathering and mineralogy. Tectonic activity has turned the mountain on its side, exposing the stripes. Crazy idea from Pachamama.  We drove a few hours through untouched lands and villages holding tight to tradition when we arrived at approximately 4700 meters above sea level. We then hiked the remaining 300 and looked around at rainbow mountains, grassy fields and the snowcapped Andes. And because it could get even better, it started to snow. Pelting snow. I was in my element- snowy mountains and I have always been close. I was quite content. Today was a good day. Time to leave Cusco and move south through Peru.

We arrived in Puno after a seven hour bus ride, the only highlight being a roadside stop to taste Kopi Luwak coffee, made from coati animal poop. They feed the coati the coffee beans and get them when they come out the other side. A fermentation type process happens in the digestion process. As I love coffee, it was a must to taste. I was not let down- it was close to the most delicious coffee I have ever tasted. It was Good Friday and Puno was ready to celebrate. They had a big parade where each of the churches carried Jesus through the streets followed by their parishioners and bands. It was fun to watch, but late in the night, I was ready for them to stop celebrating and go to bed!

A visit to Lake Titicaca was on the next day’s agenda and Pachamama cooperated. She took most of our clouds out of the sky and gave us blue skies to match the blue waters. It was so perfect, my camera had trouble focusing. This is a massive lake, the highest navigable one in the world. Despite its size, it houses only 7 kinds of fish but has the added bonus of giant frogs. We sailed to Tequile Island first. This Unesco site is home to 2000 people who make their own clothes and hold tight to tradition. We climbed halfway up the island and split into those who wanted to stroll and those who wanted to climb. Clearly, I chose climbing and was rewarded with an amazing 360 degree view of the lake and its islands. While my preference would have been to continue hiking around the island with the sheep and cows, I had to meet the strollers. The local people had put together a demonstration of their weaving, knitting and dancing. And of course, the opportunity to purchase their homemade goods. Most of our group loved the idea that the men do the knitting on the island. For me, however, that thought terrified me. To not be able to knit because I was a women was a horrible idea and I knew straight away I would not be staying. After dipping my feet in the rather chilly Lake Titicaca, we went to another island for a lunch made panchamanca style- cooked on rocks buried in the dirt. One last stop at a floating island, where about 5 families build their own island on the shallower part of the lake and cover it with reeds. The showed us their homes and lifestyle and then offered us the opportunity to purchase their handicrafts as well. This was now more shopping than I do in a month. 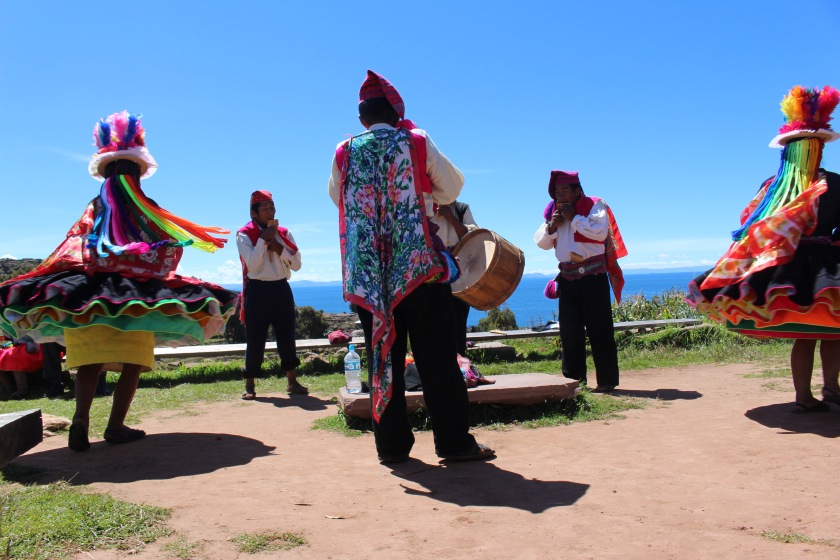 So my time in Peru came to an end, we had a bus to catch super early to take us to Bolivia. One of the group had the brilliant (at the time) idea of hitting the bars and disco after dinner, making that early wake up call ever more painful. I vowed to keep those crazy ideas out of my head for at least ten minutes and boarded the bus.