So she sat on, with closed eyes, and half believed herself in Wonderland, though she knew she had but to open them again, and all would change to dull reality.

After Colombia, I continued my trek through South America and found myself in Quito, Ecuador for a quick stop before leaving for the Galapagos Islands.  I was on an organized tour which included my hotel and they had booked my in a rather decadent one- it had fancy shampoo and everything- so I spend a good deal of time relaxing.  And it was a good thing I did, because the next week would be exhausting!  We had a 4:00 AM departure so sleep was a luxury of the past but we were in Galapagos by 10:00 AM- essentially another world.  You land on Baltra Island, one of the flatter of the islands (I am told flat is a key factor in landing strips). It is an old island and very desert like.  After the dogs sniffed my bags, identifying the ginger candy I had, we were whisked off for the first adventure. Along the way, I learned a few things about Galapagos- 97% of the land is national park and humans can live and work on 3%.  If you ask me, 3% is too high! There are only two native colors of flowers, white and yellow as the local wasps were attracted to only those two colors. Every 300 feet you climb results in a temperature drop of 1 degree celsius. No new cars are allowed on the islands- swapping is the only option and a new car costs about $100,000 USD. There are 30K people on the islands and I am pretty sure I saw that many turtles as well.

We stayed in Puerto Areyo for the first day where we threw our luggage in the hotel and hit the hiking trails. And by hiking trails, I mean a paved walkway to the beach. The walk was a beautiful one through cacti with birds and lizards everywhere. We hiked to Tortuga Bay where we went “swimming” (body surfing as we were thrown about by massive waves with a huge undertow) and then kayaking. I am a big fan of kayaking, but this one was special. We made our way out to where the sea turtles were hanging around waiting for dark to come ashore. They were everywhere, poking their heads above water all around us. The shoreline offered us a pool of sharks.  Sure, because that is what I always see kayaking. I slept really well that night!

The next morning began at the Darwin Center where I was in heaven with the information overload. When you arrive in the Galapagos, you pay $100 USD. You can really see where this money is spent when you see the work they do. They work hard to ensure the survival of a species without introducing anything that might hurt another. For example, goats were brought over years ago for farming and they have done a great deal of damage. Goats became the most expensive animal eradication project. They also introduced Australian ladybugs to eliminate parasites after years of study to ensure there would not be any other impacts. Galapagos is a marvel in evolution and balance with nature. It is also proof that humans suck. We got to see Lonesome George at the Darwin Center. I confess I was somewhat oblivious to this tortoise’s legacy and need to research him some more. But now, he is a big stuffed turtle in a rather elaborate air conditioned room- a nice afterlife in the heat and humidity of these islands.  The afternoon’s adventure was a visit to a Giant Tortoise site- where they just hang out, posing for photos for tourists. Then, it was off to our boat for the overnight sail to the next island, Floreana, named after the Ecuadorian president who finally claimed Galapagos after years in which it was left independent.

I opened my eyes the next morning and was amazed at the beauty of yet another different looking island. We hopped on our zodiacs and went ashore to Cormorant Bay for a hike. Along the way, we passed flamingoes (super up close, which I hear is rare) and blue footed boobies doing their mating dance. Along the way, our guide shared more information than I could possibly remember, even though I kept say “wow” all morning. We hiked to a bay that had tons of sting rays and crabs, which kept us from swimming much deeper than our ankles! After the hike, it was snorkel time! We were the only group approved to snorkel Devil’s Crown that day and lucky doesn’t begin to describe it. It wasn’t the easiest snorkel I have ever done and I have to admit that at one point, I gave up fighting the current and hopped in the zodiac (I felt better when all but one of my fellow travelers was getting in the boat as well!) but the rest of the snorkel was amazing. We saw tortoises and starfish and sharks and rays and fish and Nemo and even an octopus. Unfortunately, the photos never really do it justice, but it didn’t stop me from taking 132.

After lunch and a siesta (which I spent downloading and editing my morning photos), it was snorkel time again- this time with sea turtles and penguins. We hung out on the coastline where the turtles had a hard time keeping their 2 meter distance from us and were not super helpful in posing for photos. I couldn’t help but remember how much I used to hate snorkeling. How wrong I was. Exhausted from the snorkeling, we then headed out to Post Office Bay. This is a traditional sailor to sailor post office, where you drop off your mail and pick up any mail going to a future stop of your own. I dropped off a few for my parents and nieces and picked up one each for Chicago, Oakland and Cape Town. Let’s see how long until my postcards arrive! Then, back to the island for dinner, drinks and sleep…and the journey to our next stop, Cerro Dragon. 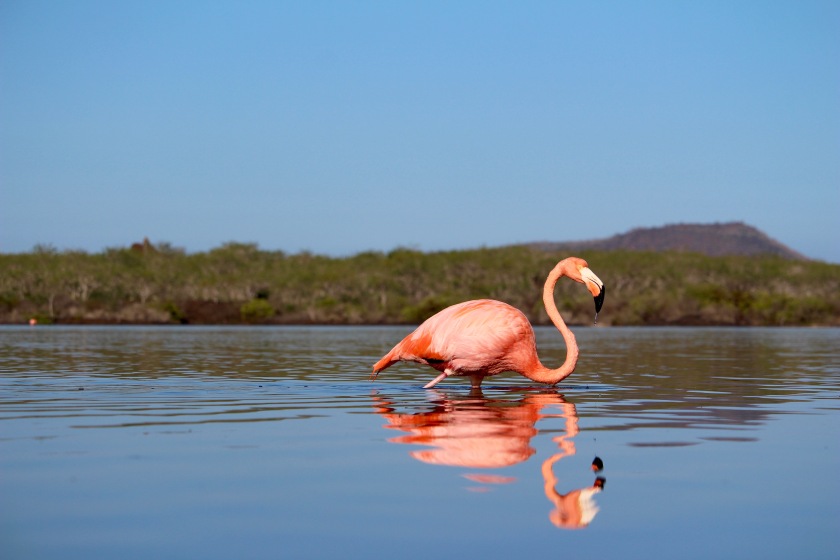 Another early morning wake up call presented yet another new wonderland. We went ashore and hiked across a very volcanic island, complete with very cool lava tunnels and sea lions playing randomly on beaches. One even posed with George, my warthog travel companion. We watched giant rays jumping out of the water to remove parasites and dodged waves splashing onto the rocks (and by dodged, I mean I ran to them and got soaked). This island was so different than the others, showing us the clear impact of volcanic activity. After the walk, we got to snorkel again, this time in a relaxing, current and wave free zone. The fish in this island were amazing and a few sharks even posed for photos for us. I have never seen such beautiful fish and starfish. I could have stayed in this water for days.  But alas, we had to get to Chinese Hat, yet another different landscape. This one is covered in trees and plants and so many land iguanas, we were tripping over them. One more night on the boat took us to Black Turtle Cove.

If you have picked up on the theme, we awoke in yet another new land, filled with mangroves and mosquitos. As we had a 10:00 AM flight and required one more adventure, we boarded the zodiacs just after sunrise for a ride through the mangroves, where turtles and sharks swim about leisurely. At this point, we were a bit desensitized to seeing them so often, that the whole morning became more of a comedy show than an animal quest. After that, we headed to the airport for the trip back to Quito, craving pizza and beer. Sadly, though, it was election day in Ecuador and nearly everything was closed, including alcohol sales. Channeling our best “A Christmas Story” thoughts, we managed to find a Chinese restaurant open and they even agreed to sell beer. After nearly falling asleep at the table, the Galapagos adventure was over. I had one last day in Quito by myself, and back to the dull reality of urban life. 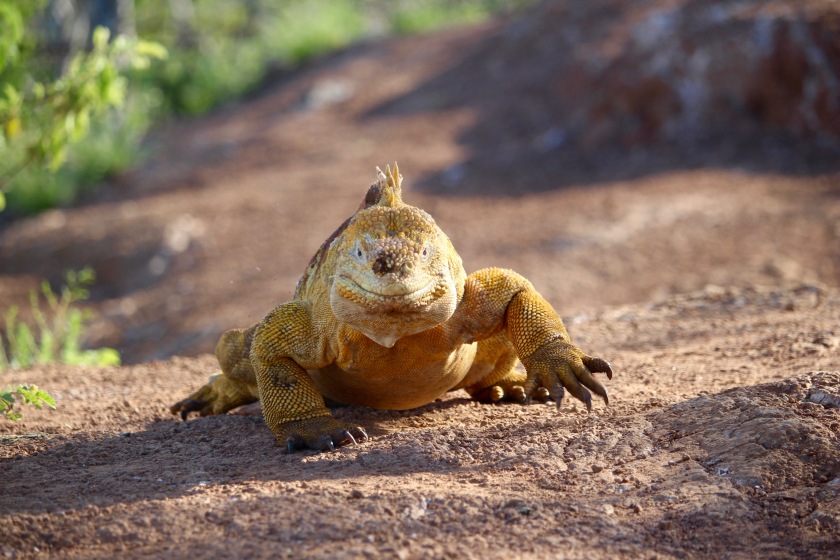 I left my fancy hotel and headed to the real Quito, the Old Town. It was busy and crowded and very cool. There were lots of squares, including the Independence Plaza where the executive power of Ecuador sits and where the previous night’s election celebrations had been held. It was still filled with banners and confetti, but most importantly, contained a gelato shop. Ecuador still has some work to do on gelato, but I was happy to compare. The Old Town isn’t the safest place, mostly due to pickpockets and outright bag thieves so the police are literally everywhere. I took this as a sign that I was better suited for being out alone during the day rather than night. I did manage a trip to the Basillica which sits high on a hill and allows you to climb even higher to the top, looking over nearly every building in Quito. It is the oldest Neo Gothic church in the New World, a title which amused me quite a bit. 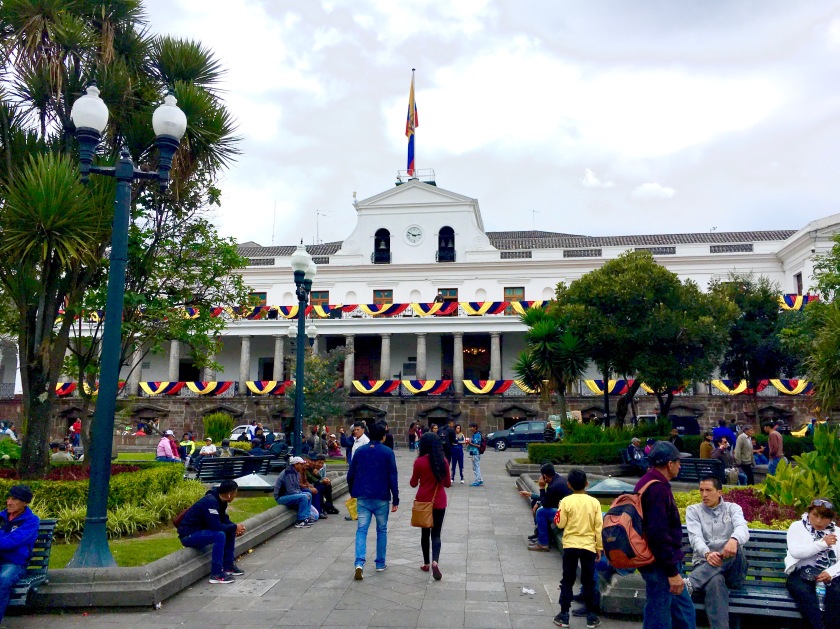 And so ends my wonderland stay in Ecuador, primarily the Galapagos Islands. Off to Peru in search of a laundromat and another adventure rather than a dull reality.