“If a fish came to me and told me he was going on a journey, I should say ‘With what porpoise?'” said the Mock Turtle in Alice in Wonderland.

I don’t snorkel.  Like ever.  Pretty sure the last time I snorkeled, I was able to levitate over the water.  I still have tortured memories of the 20,000 Leagues Under the Sea ride at Disneyland.

But, I was at the Great Barrier Reef, one of the Seven Wonders of the World, and in keeping with my rule of “Just Say Yes” on this trip, I decided to give it a try.  We took off from the pier in Cairns (PSA-pronounced cans) in Queensland Australia and headed two hours out into the ocean, using my Antarctica found ability to stomach sailing across the waters.

And then it was time to snorkel. My enthusiasm was moderate, at best, but I donned my fins, my wetsuit and mask and snorkel and jumped in the water, having absolutely no idea what to expect.  To say I was disappointed, was an understatement.  It was a bunch of rocks under water.  I posed for the scuba diving photographer and swam a bit away from the boat.  Holy Nemo, what a surprise I had in store.  THAT was the Great Barrier Reef!   I spent the next few hours swimming amongst the fish, some that could feed a large family and admiring the coral.  The photos below were taken with my phone which does not have an underwater filter so they are a bit blue or green, but you get the gist.

Being me, I was whistled at twice for pushing the limits of the boundaries, but who could blame me, right?

Then it was time to head back, so I channelled my inner Calypso and stood against the wind and sea spray on the deck and watched us sail back into Cairns.   I am not sure I get the allure of snorkeling, but I can now at least say, I see the porpoise of it. 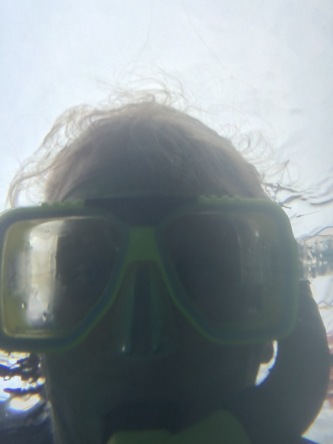 I even took a snorkel selfie to prove I did it!

And so now, off to Melbourne in Victoria.