“Would you tell me, please, which way I ought to go from here?”
“That depends a good deal on where you want to get to,” said the Cat.
“I don’t much care where–” said Alice.
“Then it doesn’t matter which way you go,” said the Cat.
“–so long as I get SOMEWHERE,” Alice added as an explanation.
“Oh, you’re sure to do that,” said the Cat, “if you only walk long enough.”

So begins Egypt, Part II.  Quick recap from Part I.  We have already visited the Pyramids which were clearly built by aliens, rode a camel, visited a few temples, skipped many hours of sleep and crashed our felucca into the banks of the Nile.  Not bad for one week in Egypt.

After spending the night on the deck of our damaged felucca, we rose with the sun to begin the day’s journey to Luxor.  I believe I added three hours of sleep to my tally after this adventure.  First stop, a temple to honor the crocodiles.   Kom Ombo had mummified crocs but we spent most of the visit looking at the temple engravings looking for evidence to support our growing alien theory.  A spinoff travel company was also invented, along with a lot of slightly fabricated stories about the temples, bridges and history of Egypt.  The fact that this group included a lot of people with fantastic imagination made this ever so much fun.

We arrived in Luxor a few hours later.  Never in my life would I think I would say I arrived in Luxor and not mean Las Vegas so it all felt a bit surreal.  Some of the group headed out to another temple, but I was feeling a bit templed out so a few of us visited the pool instead.  That evening was dinner, overlooking the Luxor Temple, beautifully lit in the evening and then early (11:00 PM) bedtime for an early morning hot air balloon ride over Luxor and the Valley of the Kings.

It was a beautiful ride until landing time.  My balloon ride in Kenya included a bit of a crash landing so I was super excited for this one.  It did not disappoint.  Our pilot seemed to think a somewhat narrow road between two fields with a concrete block median, next to a tree and between two fields would be a good place to land.  I don’t claim to be an expert hot air balloon captain, but I feel I might have made a different choice.  After narrowly missing the tree, we slammed into the ground, then the concrete blocks and then the other side of the road.  He was quite proud of his landing so I passed on the opportunity to correct his thinking.

We then hopped on some donkeys to ride to the Valley of the Kings.  Yep, donkeys.  Turns out they are way more fun to ride then camels if you can get them to move.  They clearly didn’t listen to the female voice, so a few of us tried our best masculine voices to trick them.  Donkeys are smarter than you might think.  The Valley of the Kings was definitely a highlight.  I had no idea what to expect- certainly not 983 tombs (that number might be slightly exaggerated and closer to around 62) literally cut out of the side of the mountains. Time allowed us to go into five of them and since it was 329 degrees outside, that was plenty.  They are amazing- much of the paint is still intact- and you go deep into corridors in the mountain.  Of course, we found plenty of alien evidence, including lots of blue men but the highlights were the beautiful colors in the tomb of Ramses V and VI and King Tut in the flesh and blood.  Well flesh at least.   Photographs are not allowed so an shot from the balloon is the best I can do. 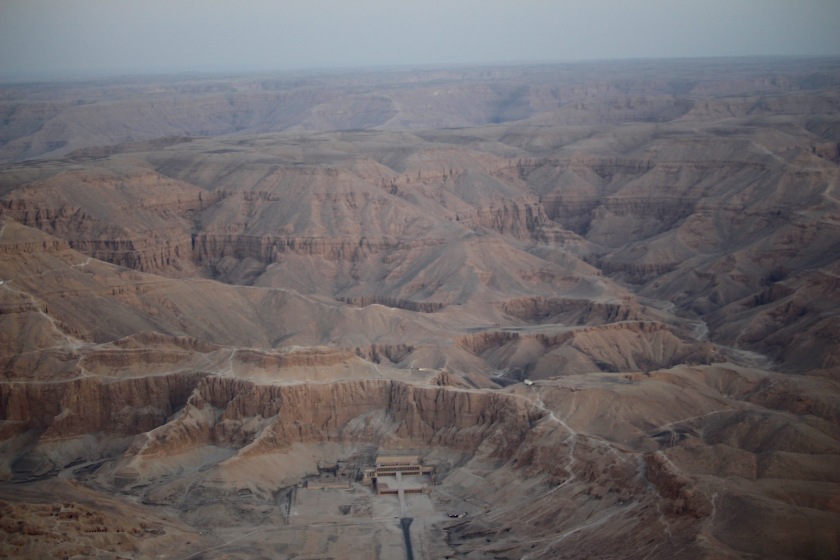 Overnight train, Take Two, to get back to Cairo for one of my favorite days.  We headed into Old Cairo for an Islamic tour, including visits to several mosques, the market, streets that have been restored to their original design and time to hang out in a cafe and watch the energy of this city.  I learned a lot about Islam that day and satisfied one of my goals for travel, opening my eyes to different, sometimes contrary views of the world.  I could have lived this day many times over.

It was now time for some relaxation (ha!).  After another two hours of sleep, we flew to Sharm el-Sheikh and then drove two hours to the Red Sea.  Spoiler Alert- it isn’t Red. Our hotel was a gorgeous family owned resort on the beach where we snorkeled and tanned and sat in the water talking for hours.  And since we had been getting so much sleep, we took the rare opportunity to climb Mt Sinai by moonlight to watch the sunrise.  We left the hotel around 11 PM and started the hike sometime between 1 and 2 AM.  It took about 2 1/2 hours to reach the summit and it was a rocky, sometimes steep, climb.  The camel walking next to me was sometimes a temptation to ride, but I pushed through.  My lungs are still burning two days later.  One hour later, I watched the most magnificent and hard earned sunrise I have seen. 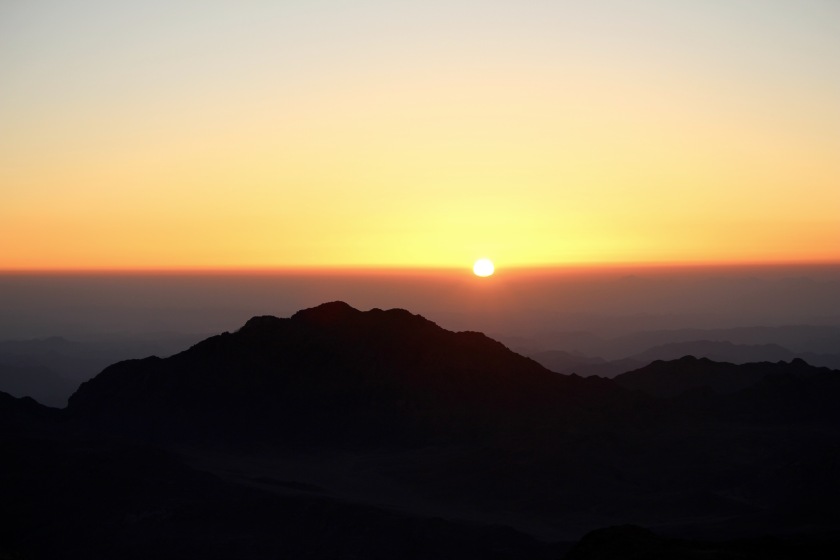 And another of the amazing group of people that have become dear friends at the summit of Mt. Sinai.

And so ends my time in Egypt.  I can’t say enough about this country.  If you have ever thought of going, please do.  The history is indescribable and the people are absolutely lovely.  I never once felt unsafe, don’t let the media scare you.  Visit history while you can.