“I would tell you my adventures- beginning from the morning,” said Alice a little timidly “but It’s no use going back to yesterday, because I was a different person then.”

Sad to leave Egypt yet excited to meet Jordan, our group boarded the high speed ferry from Nuweiba for the 90 minute journey to Aqaba, Jordan.  Six hours later we arrived.  I went to Jordan with no expectations and little knowledge except that I wanted to see Petra.  Egypt had surprised and changed me more than expected so who knew what Jordan might do.  It did not disappoint.  First stop, dinner, ice cream and sleep.  While this may not sound exciting, the idea of gelato made me downright giddy.  Second stop, a drive to Wadi Rum for some 4×4 rides in the desert.  Wadi Rum is believed to have once been the bottom of an ocean and is also the landscape scenes from The Marian (further evidence of my ever expanding alien theory).

We paused for the sunset, now a regular activity for us, and headed to camp.  This camp did not have electricity or (gasp) wifi or cell service.  But it had stars, billions of stars.  We saw the space station move across the sky and for the first time in my life, saw the Milky Way- like every star in the Milky Way.  And we had wine.  How I had missed a good wine and this night was perfect for it.  Most people slept outside but my ever practical mind weighed the effort of moving my bed outside the tent with the fact that I would be asleep 30 seconds later and not actually see the stars plus the idea that the sun would rise and start cooking people in a few hours.  It was all in all, a fantastic night and I woke up a little different than the day before.

We awoke the next day, dirty and sweaty and climbed into our car.  I am pretty sure a teenage boy’s locker room smelled better than that thing but off we went.  We had only one stop today, Little Petra.  This was like an appetizer to a meal that you didn’t order and had no idea what was even on the menu.  It was pretty cool to see some of the rooms carved into the sandstone.  The believe that Little Petra was once a food court where traders came before entering Big Petra (my own name).  What is probably the least talented Bedouin in history played some traditional music for us as we checked out the dining rooms and kitchens.

Then it was time for the Indiana Jones Mother of all Cool Things… Petra.  I have wanted to see this for years and was my sole purpose in coming to Jordan. We woke up early AGAIN to be the first ones at the Treasury, the building everyone recognizes.  I cannot say how grateful I am that we did.  We walked the long siq (pathway) through the canyon.  Every corner was filled with the anticipation of seeing it.  Our guide then totally tricked us into looking up so we all turned around together to see it.  If you were still sleeping in town at that time, you weren’t anymore.  You could hardly hear over the gasps and camera clicks.  We ran to the Treasury and stood in awe. Needless to say, when the next group arrived, certain they were the first, we stood proud.  Then, since we had not been climbing enough steps, we took the 800 step climb complete with rock climbing since my group went ahead and took the hard way) to look at it from overhead. We sat in a Bedouin tent, listening to his music overlooking the Treasury for a good while, making the memories. Another adventure that changes you.  About 10 more miles in Petra and it was time to go.

Until that night, when we came back for the totally cool Petra by Night.  After the mile long, candle lit walk down the siq, you arrive at the Treasury to find candles, traditional music and story telling.  Every night becomes cooler than the night before.

The next day it was off to the Dead Sea.  We saw some castles on the way and stopped by the cave home of this fabulous eccentric man who gave us tea and showed us his collections but we were ready for some relaxation.  A quick dip in the Dead Sea and we found all of our cuts and scrapes but had a great time floating was followed by a complete mud mask.  I am definitely changed from this adventure- at least ten years younger! 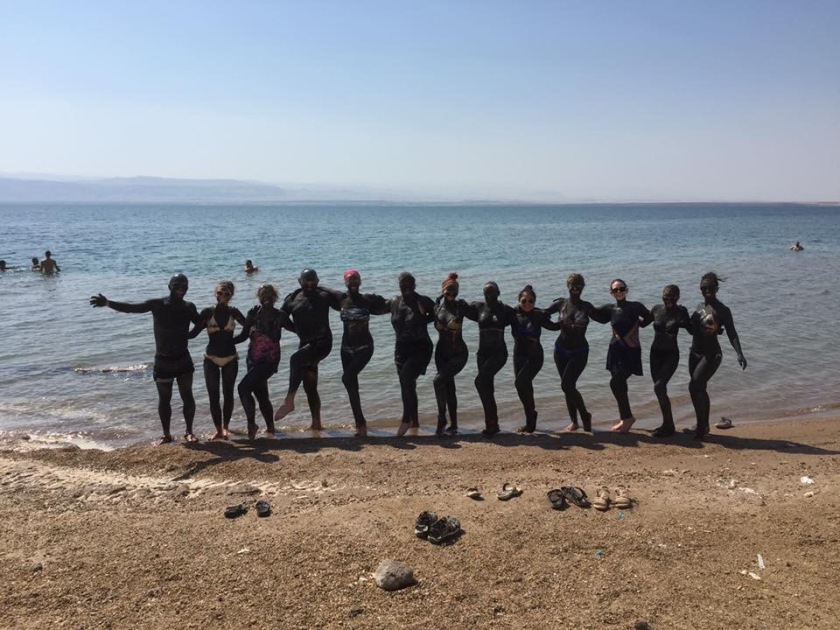 And then it was time for our last full night together as a group. What started as some random walking around town, we met up in a cafe.  A few hours later, the place had closed, the staff drew the blinds and turned up the music for an impromptu club and a group celebrating the end of a great adventure.  And yes, I am different for it.

Off to Morocco- another lifelong dream.