Skip to content
‘I don’t understand you,’ said Alice “its dreadfully confusing.’
‘That’s the effect of living backwards,’ the Queen said kindly, ‘it always makes one a little giddy at first-‘
‘Living backwards!’Alice repeated in great astonishment.’ I never heard of such a thing.!’
‘-but there’s one great advantage in it, that one’s memory works both ways.’
‘I’m sure mine only works one way,’ Alice remarked, ‘I can’t remember a thing before they happen,’
“It’s a poor sort of memory that only works backwards,’ the Queen remarked.
Alice Through the Looking Glass
After a few days in the United States, primarily to switch to summer clothes and to grab my South American visas, I hopped a flight to Cartagena, Colombia’s fifth largest city.  I really didn’t know much about this country other than the memory of the guerrillas and drug trade…and Romancing the Stone. Therefore, I had no idea what to expect. Fortunately, my backward looking memory was not a reflection of Colombia today. Normally when I arrive in a new country, I go to my room and relax a bit.  Not here. The energy of this town makes you want to get outside and explore. Cartagena reminds me a lot of Mexican cruise ship towns before the cruise companies took them over and turned them into shopping malls. It is raw. On the street, you can buy absolutely anything you need, or didn’t know you need. As a result, every male tourist is wearing the exact same hat. My hotel was in the Old Town, which is filled with life. It is crowded and loud and oh so fun. They do make things a bit difficult for vegetarians but if you are good with queso, especially fried queso, you won’t starve. After walking a few miles around town and getting my daily quota of fried cheese pastries and salted mango with lime sauce from a street vendor, I found a gelato shop run by a lovely Irish lady. It officially settled my future relocation to this city. And my Spanish acquired from Sesame Street and Dora the Explorer was better than I realized. The subsequent heat I would feel, did alter my relocation plans. Fortunately, my memory works well enough to remember the melting sensation I felt. 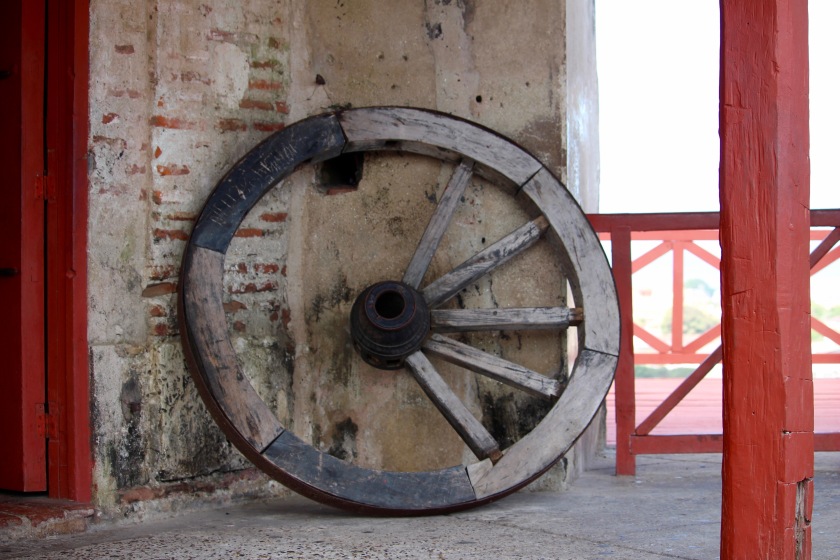 My second day was set to be a beach day. I headed to Bocagrande, the view made famous by Miami Vice.  Here, I rented a chair and umbrella for $3.50 for an afternoon of people and water watching and reading. It all felt less decadant with the memory of the 4 miles I had walked to reach this beach. That night was the first night of my tour and soon found that I had yet another fantastic group of new friends on this adventure. We started off the tour with visits to the fortress, the monastery and the Old Town. Despite the heat, I did manage to learn a few things about Colombia. First, the government reports an 8-10% unemployment rate, but locals feel it is much higher (could explain all of the entrepreneurs on the streets). Second, much like the United States, the British could not defeat Cartagena and despite being outnumbered, Cartagena outlasted and bested the British attacks. Finally, 73% of Colombia is safe to travel (I have no idea how they have determined this number but it seemed to be quite exact). We capped off the day to a visit to the famous volcanic mud baths outside of Cartagena. Filled with visions of luxury, we were quite shocked to find what resembled a giant termite mound filled with mud so thick you were suspended upright in it. The laughter made it all worthwhile.

Our next day took us Minca, about four to five to six hours (Colombian time) from Cartagena. Along the way, I learned that it is 4 degrees from the equator and therefore has only a rainy and a dry season….nothing else. We saw both. Colombia is broken out economically into six strata, the lowest group earning about $230 USD per month. In Minka, we stayed at a fantastic, backpacker hostel complete with chickens and hammocks and a beautiful view of the sunset over the ocean. It was a 400+ step climb to the hotel and we all climbed with plans of heading back into town for dinner. Those plans quickly died as the memory of the climb was too fresh to inspire a second one the same day!

After climbing back down the stairs the following morning, we headed off to La Victoria coffee farm. This farm was atop a mountain, on a horrible winding road. It sucked. I am pretty sure I was the same color of green as the trees when we finally arrived and I promptly announced I was NOT doing that again. My love of coffee though, helped me forget the memory of the ride and the aroma lured me into the building. We had a volunteer tour guide (wait, you can volunteer on a coffee farm- sign me up!) who taught us tons. Colombian coffee beans are broken into three categories by a 120 year old machine based on how long they float in water. The beans that sink first are exported and become the delicious Colombian arabica beans we love and is about 55% of the harvest. Third quality stays in Colombia, which explains the horrid coffee we had been drinking, so bad that Colombians POUR sugar into it. It was so sad that most people never taste the amazing coffee they grow. After the coffee farm visit, we hiked to a waterfall, a very chilly yet oh so refreshing, waterfall and then learned how they make chocolate in Minka. This visit was most notable as they served us homemade hot chocolate spiced with cardamon. 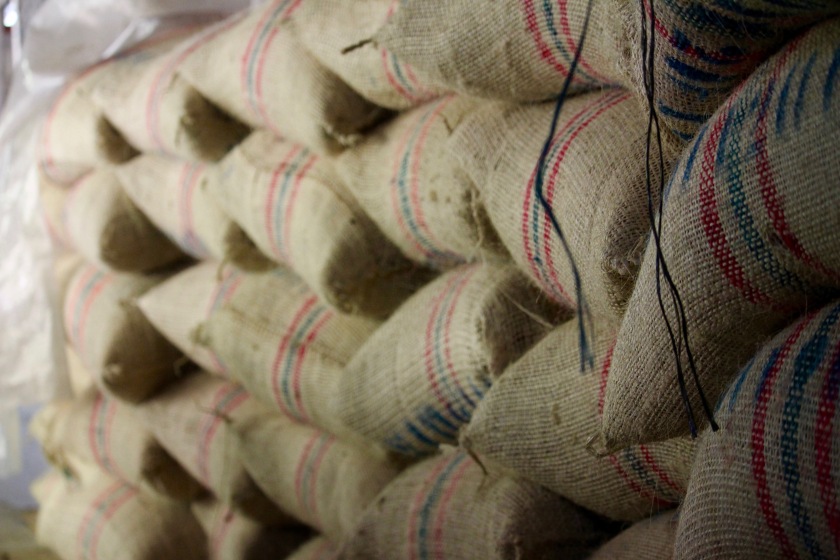 We awoke the next day in Tagonga and had an incredibly slothful day at the beach. We hired a fisherman boat to take us to a somewhat remote beach (the road being too dangerous to walk). For 40,000 Colombian pesos ($14 USD), we had the boat ride, covered lounge chairs, lunch and a cocktail. Hmm. Maybe I should reconsider living here! I both started and finished a book on this beach. We did burn off some of the sloth that evening when we took on the local kid’s soccer team (and by “we”, I mean most of the group played while I ran around and took photos).

After laying on the beach all day, it was time to get active. We were headed to Tayrona National Parque. This area was very active during the drug trade era of the 70s, 80s and 90s, but had been taken back by the government. Four indigenous tribes live here, all suffering huge losses during the days of guerillas. The government had taken back the land and it was a protected beautiful park. We hiked five miles into the woods and along the shore to a beautiful beach where we collapsed into the water. Removing our pruned bodies from the water, we dressed for the five mile return hike. I would sleep well tonight.
Having had one inactive day and one active day, it was time to combine the two into hiking and river tubing. We took a bus outside of town, hopped on some motorbikes and rode to the mountain. After scaling what I am quite certain was a 90 degree hike up, we hopped on the tubes we had carried and floated for nearly two hours down the Palomino river. We also brought new meaning to sloth as, despite floating towards rocks and trees, we failed to assist in paddling.

The last stop in Colombia was spent in Santa Marta, the oldest city in Colombia and very susceptible to pirate attacks many, many years ago. After several of the group headed off to their next adventure, the remainders took a cab to a beach where we took a boat to another beach, Playa Blanca. The beauty of this beach was that the the mall came to you. If you sat long enough under your tent, anything you might need would appear in front of you. 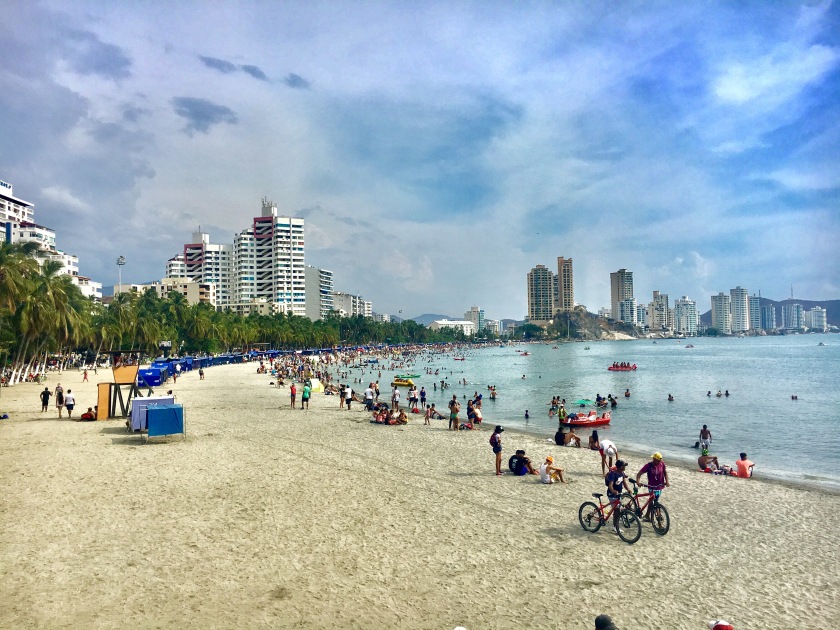 Colombia is yet another country that exceeded my expectations. It certainly isn’t the Colombia you remember from decades ago. Don’t get me wrong, it still isn’t the safest of places so you have to make smart choices about where and when you move about. But if you do that, you will love this country. The people are lovely and learning the ropes of customer service. The landscape is one of the most beautiful you will see with everything from mountains and beaches to forests and cities.
Forget what you remember and go. Make your memory work forwards.
Off to Ecuador and Galapagos.